Lady went to the capital city to meet some American humans coming to visit. Two ladies are staying with us. The men are staying at the YMCA. Lady brought me a new baby. I promptly chewed it's nose off. I love it. I found it in her bag. I always check to see if she brought something for me. She was walking kind of funny. She hurt her back. Jerry made chocolate cream pie and that made Lady feel better -that and the dark chocolate m & M's the Americans brought her! She doesn't share her chocolate with me, or anyone for that matter. 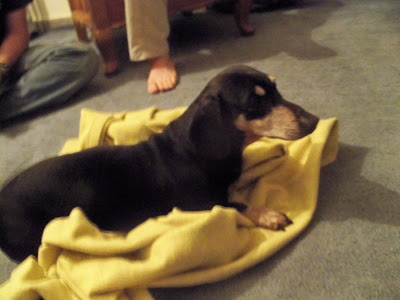 The best part -these guys played tug-of-war with me!
Posted by Teddy at 2:50 AM 1 comment:

Just Lady and Me

Deborah's gone. Jerry's gone, but she'll be back. Just Lady and me. Lady was gone most of the day, so it was just me. When she returned, I gave her the most enthusiastic and warm welcome! At least it didn't storm while she was gone. I took her for a walk, then we had dinner in front of the TV. Lady had been up on the ridge getting ready for some American friends who are fixin' to come. Now, there's thunder. Woke me up. So, might as well write my blog cuz I can't sleep. Nope, I can see the lightning through the window. I hide under the blanket but I can still see it and I shake. I don't like thunderstorms.
Rain, rain you can stay,
But send the thunder and lightning away!
Just Lady and me. I kinda like that.

We're always fixin' to do something. Lady tells Jerry, "We're fixin' to go out." If she cooks, she says, "we're fixin' to eat." Lady is always fixin' to do something or go somewhere. "I'm fixin' to plan for the Children's Home kids." Me? I'm fixin' to take a nap, fixin' to chase flies, fixin' to love the stuffin's out of my baby, fixin' to eat, scold that big yellow lab marking my gate, fixin' to take a nap, fixin' to snack, fixin' to lie in a sunbeam, fixin' to go to bed, fixin' to chase birds on the balcony, fixin' to water plants and fertilize trees, fixin' to nap...
Hey! I got to Skype with my Uncle Floyd and Aunt Virginia as well as Grandma and Grandpa last night! They have been to see me in China and South India, and they are coming again!! Yippee! hey gave Lady some real good news for Deborah, who is fixin' to leave early Monday. They collected some money for Deborah's tuition! Praise the Lord!! Deborah has one more year for her MDiv before she returns to her home country of Myanmar, next March. She has stayed with us for two summers. She took care of me for a couple of months when Lady was in the US. I lived in the girls' dorm! Fun! Until one of the girls left the gate open and I ran out and took on a big street dog. He bit me on the neck and on the ear. Five trips to the vet for after-bite shots and I was good to go. I will miss her. She eats meat.
Well, I am fixin' to go find a sunbeam in which to bask. 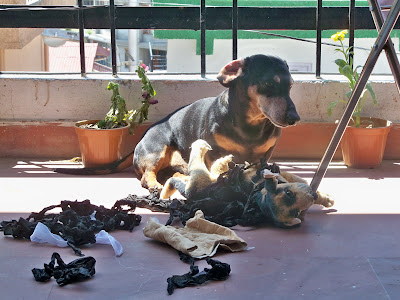 I love babies! My little buddy Wyatt came today. Lady, the baby's parents, and our other American friends had to go to a funeral. One of their close Indian friend's mom died yesterday. In India, they have the funeral really fast because they don't embalm. Christians bury but Hindus cremate. Lady told me. Yesterday, the men went to see the family. The lady was on a cot. She's with Jesus now, so it was just her body lying on that cot. People came and put flowers on the body. Today, they went to the service at the big church on the ridge. It was in Hindi, but otherwise pretty much like funerals in Lady's country. The open coffin was in the front. The lady was wrapped in white cloth with a veil over her face and cotton in her mouth. There was no eulogy. Lots of pastors came because she is a pastor's wife and a pastor's mother. They carried the coffin out and drove her to the cemetery. Lady and her friends took taxis to get there. They put the casket on a slab and said prayers and sang songs. They sprayed floral spray in the casket. Several people came and did that. Then, they carried the casket to the hole and sang some more and prayed some more. Oh, and they cried a lot. Then, they not so carefully put her casket in the hole. All the people threw rocks and dirt on the box. Then, they threw flowers onto the fresh dirt. Lady and her friends said their good-byes and left.
The baby is teething. He only slept a half hour at a time. He played with Jerry and was so cute though. She thought he was hungry but he wasn't -his gums hurt him. I tried to distract him.
Bless his little heart. He likes me.
Posted by Teddy at 2:37 AM No comments:

I hate balloons. They scare me. They float around and look scary, and they make awful noises when they pop. They make my fur stand up. I really don't like them. That's why Lady decorates for my party with paper balloons. Balloons make me shake.
I hate thunderstorms. They're loud and very scary. The lightning frightens me. I hide. Thunderstorms make me shake.

Yesterday, I got the double whammy. Lady had a "Welcome Back" party for Kira and Ezra, who used to live in this house. All the kids in the neighborhood came. Lady blew up balloons and they had sword fights. I hid under Christy's skirt. They popped the balloons, and waved them around. I survived the party without biting anybody but I sure wanted to. I am friends with most of these kids but altogether they are a bit overwhelming. It's a strain to be so good and not snap.
Then the storm came. I hadn't stopped shaking from being terrorized by short humans. Oh, the stress. The power went out so Lady and I hit the sack early (for her, not me). The power came back on, but we just stayed where it was warm and safe. 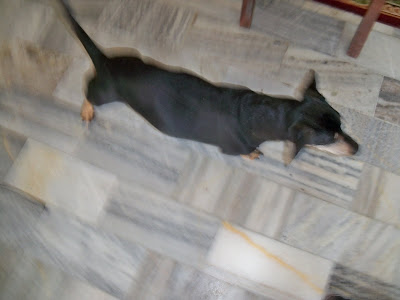 Me running to get some food that dropped. I am on clean-up duty. Don't worry -no chocolate. 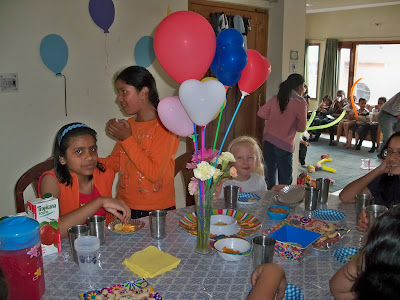 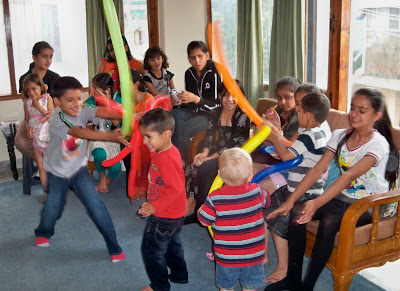 You're not going to believe what happened this morning! Lady came just in the nick of time to save my baby, the one Jerry gave me for my birthday! What? You thought it was me being kidnapped? Nope. Who were the baby snatchers? Two monkeys. I was out on our balcony watching the world go by with my newest baby. I told Lady friendlies were here. She thought someone was at the door, but I was facing the balcony and not barking. There were two monkeys sitting there, and one was holding onto my baby! The screen door was open because I had just been out there. Lady told them in her very firm authoritative voice (she is a teacher, you know) to drop it! They did, and ran to our other balcony. Lady saved the day! She is most concerned that they don't bite me. And she doesn't want them running loose in our house! 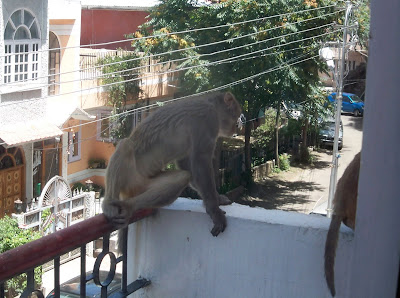 The culprits trying to make a getaway. 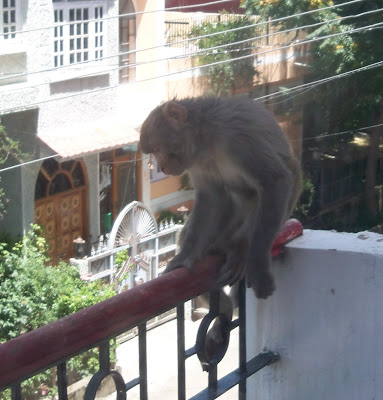 Sitting on our balcony. 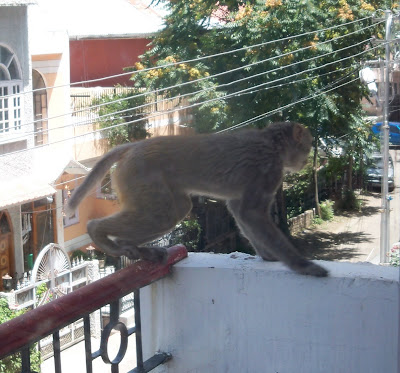 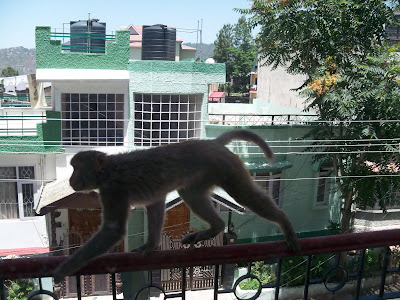 Monkeys are very very populous in our city, and common in the 'hood, but we don't want them in our house! They bite and steal. Bad monkey!
Posted by Teddy at 6:03 PM 2 comments:

Email ThisBlogThis!Share to TwitterShare to FacebookShare to Pinterest
Labels: doxies and monkeys

We had another storm last night. I shook all night. The temperature dropped to 48 and only a high of 70 today. Very nice in the sun, but I had to wear my Pooh Coat. I was aching. This is when my arthritis kicks in and hurts me. Lady got my heater out again so I could warm up.
I gotta tell you a funny story. One of Lady's friends came to visit this morning. Lady gave her cake and tea. She gave me some of my dog treats that Aunty Lindsey gave me for my birthday. Then, Lady received a phone call and left the room. After her guest left, Jerry told Lady what happened. After she finished her cake, she reached into my baggie and ate my doggie treats! The nerve! She ate my cookies! Jerry was laughing and had to go in the kitchen. When she stopped, she pointed to the writing on the baggie that clearly says that they are MY COOKIES!! She told Jerry not to tell Lady, but of course, she did. This is not the first time Lady's guests have eaten my biscuits. I have my own jar with MY photo on it and MY name on it, yet still humans reach in and eat my treats!  Lady teaches me to share but she usually means with the poor dogs. Aunty Lindsey, your doggie cookies are a hit!
Posted by Teddy at 12:29 AM No comments:

I gave Lady a good scare last night. And I don't mean the "AHHHHHHH!!!!" kind. I mean the "Marley, what's wrong? Why are you crying?" kind. I was just lying on the mattress, and crying. Lady thought I was dreaming so she tried to wake me up. But I wasn't dreaming. I was hurting. She thought maybe my tummy was upset and tried to get me up to go outside. I cried and wouldn't put any weight on my left front leg. She carried me outside and I just hobbled around on 3 legs, and wouldn't take care of business. I just headed for our gate. She gave me a feel better pill. Two hours later, I walked on all fours. I got one of my nails caught in the carpet when I was digging to America, and it hurt. I'm fine now.
My tummy is still not right. Lady has a time trying to get the medicine in me. I am better though. We'll check with the doctor tomorrow.
Posted by Teddy at 1:50 AM 2 comments: