Well, you'd think I would have learned my lesson about running with the big street dogs. I live in a house with a bunch of human girls. One of them left the door open. Open doors mean opportunities to meet girl dogs ( Lady doesn't all me to use the real word for female dogs). I got bit on the neck. When Qing came back from classes she noticed the blood and the hole in my neck. She took me back to the hospital for another series of five after-bit shots! OUCH! When am I gonna learn not ot take on the big boys! That was January 15th. I have already had to go back three more times. One more and I am finished. But, I also have a skin infection -more spots. So, I am on medication for that, and have to have a topical ointment put on every day twice a day. Lydia took me to hospital this last time. Qing is in her last semester of her bachelor's program. Graduation is March 13. She told me Lady is coming back for graduation, and to get me. Yippeeee!
Recently, some of my American human friends came by to check on me after hearing from Lady that I had been hurt. I was sooooo happy to see them! I cleaned their faces good. They told Lady I was acting like myself, so she would stop worrying. They told me Lady misses me terribly. She is still in the US and is trying to get back to India. What a happy day that will be when my Lady I see! I need to stay out of trouble until she can come back to get me!
Posted by Teddy at 10:16 PM No comments: 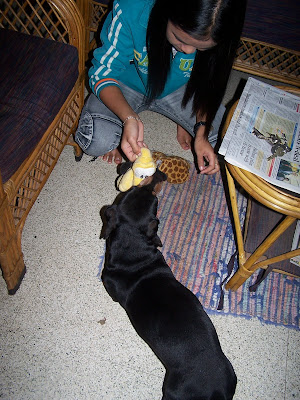 Hannah and me - I love playing tug o'war. 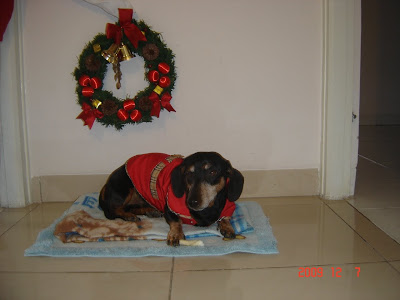 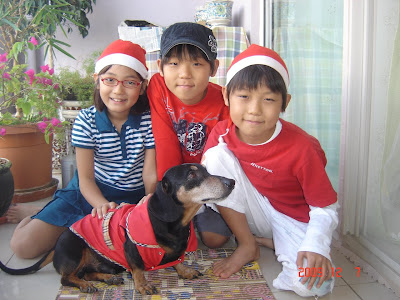 Mo, Hu, and friend. How do you like my sporty jacket? 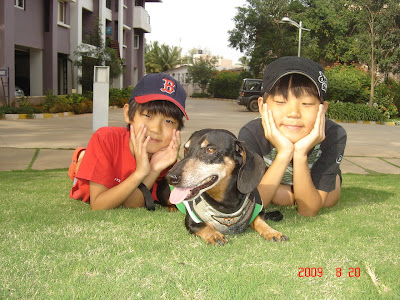 At home with Mo and Hu. 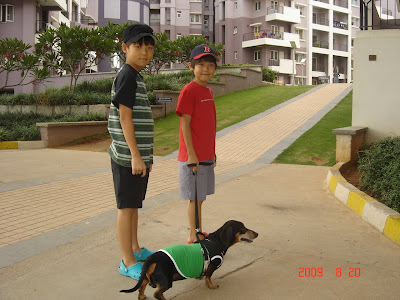 Taking a walk on the wild side with Mo (taller one)and Hu in our apartment complex.

By popular demand, I am updating my blog. I am currently in India. I have been living with Mo and Hu, two very fun Korean boys, from July 1, 2009 until Dec. 20, 2009. The boys and their family had to go back to Korea for awhile. I loved living with Mo and Hu. Hu, the younger boy, plays piano. When I lived in China with Betty, I often helped her practice. I'd sit right by her feet or in her lap the entire time she practiced. It's an important job helping the youngsters practice their instruments. Whenever Betty practiced her gourd flute, I would sing. I don't have any idea why this caused a lot of laughter on the humans' part. When she stopped playing, I'd stop singing. When she started again, I'd start. I think I sounded pretty good, actually. So, when Hu started practicing the piano, I knew just what to do. Hu also studied Chinese, so he could practice with me. Chinese is my first language, you know. Mo studies Japanese. Can't help him there. This family speaks Korean in the home, so I learned my fourth language. What's the third? The local language in my state in India.
So, now I am staying with Lady's Chinese/Burmese goddaughter Hannah, and Deborah (their English names) in the girls' dormitory. What a life! I get a lot of attention. These girls are in seminary, where Lady used to go to church, and teach ESL classes. I often accompanied her to the seminary for classes. We also stayed here after we moved out of our house at the end of May. That was a memorable day! I got bit in the butt by a big, black bully! All of our furniture had been carted away. Lyd and Lal had come from the seminary to pick up all the stuff we were leaving in India, until Lady's return. I snuck out the gate to go see the girls down the street. Lady does NOT like those females dogs because they aren't kind to me. They dance with the street dogs, but not with me. Is it because I'm black? Short? Chinese? Well, whatever the reason, they bite me in the face if I try. The neighborhood boy dogs don't like me, either. They are jealous! What a coward! He bit me in the butt! It bled a lot! Lady cried and calle dmy vet. He told her how to stop the bleeding, but it didn't stop after thirty minutes. Finally he came, and said I needed to go to the hospital. The driver who had come to take us to the hotel drove us to the vet. Lady's arms were caked in blood, as she had to apply pressure to my wounds. At the hospital, I started bleeding again. Lady cried, and they took us in. Thye gave me shots, and applied some stop bleeding stuff. I had to go back to the hospital four more times for shots. Those nasty street dogs aren't innoculated against diseases, so I have to get shots to protect me. I HATE getting stuck by the white coats (vets). The hospital here is quite different than the ones in China. The waiting room and the treatment room were the same in China. Lady doesn't allow me to step foot on the floors of either place, nor am I allowed to sniff outside! I have to hold it until we are far away. She doesn't want me to pick up any other germs.
Lady left for America July 1, and I stayed in India. She was afraid she wouldn't be able to get me back into India. She thought she was only going to be gone until Oct. 1, but due to a death in her family, my Lady stayed with her family for a few more months. She has plans to return to India in early February. She told Hannah she would come to get me as soon as she could. So, check back here for more stories of a little black Chinese dog living in India. Lady says we are moving from the south to the north! Here are some photos of my life in India. You can write me at littledogmarley@hotmail.com
Posted by Teddy at 8:08 AM No comments: