Lady here. Granma and Grandpa survived my trip to North Carolina. The casualties were two more pencils, Grandpa's steak dinner, and the contents of the bathroom trash. He got out in time out. He drug stuff from under the bench and chewed it. He expressed his displeasure at time out with a puddle and a pile. He had a good day Monday so Mom didn't sell him on eBay. I came home today and brought home a one pound bar of Trader Joe's 72 percent dark chocolate bar. Teddy found in in my suitcase under clothes. He was quite for a few minutes so we chanted our mantra "Where's Teddy?" I found him on my bed covered in chocolate, as is the blanket. He ate three squares. I called the pet poison hotline. They calculated the amount of theobromide he ingested. It was significant enough to cause seizures and heart arythmia and recommended he go to the hospital. It was 10:00 pm. Grandma and Grandma went too. The hospital is 25 minutes away. He had to have induced vomiting, activated liquid charcoal, fluids, and stay overnight. I've already called to check on him. No fever. Vitals are good. They got lots and lots of chcolate out of him. I have to call at 6:00 for an update. He might be released at 7:00 am.
It's going to be a long lonely night. We appreciate prayers and power of the paw.
He gets into everything! I live in fear of this kind of thing. I pray he outgrows it.
That was one expensive chocolate bar!
I'll write an update tomorrow.
Posted by Teddy at 12:34 PM 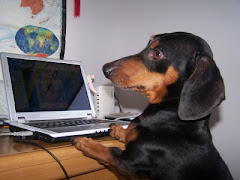