"Casey is doing well and is glad to be home. After a month he is finally starting to try and even sometimes do the things he used to do. After Casey was brought home he heard me pulling into the driveway and before Allison could catch him he trotted out the dog door, and down the steps, and fell in his chin. But he shook it off and crawled up on his little trampoline to watch me pull in. It was great to see. He barked a little when the other dogs started barking and he hasn't done that in weeks. He is eating everything, I mean everything, that we put out in front of him, and eating twice as often as before to catch up. I think this is the best sign he is over the hump. He sleeps a lot, but if we change rooms there he comes. He likes the cool floor and he like curling up at our feet or on the bed where he can keep an eye on us. He still has a tube in his esophagus which we do use to administer a couple of drugs because it's there, but is no longer needed for feeding because he is eating in his own.  We hope to have it removed when he sees the doctor on Wednesday.
He is still on about eight drugs. Even that is fewer than what he has been taking in the past weeks,  but we think he is under the burden of the treatment as much as the disease. We hope that we will see fast improvement as we take him off a few more.   The blood results this morning say that he does not have Rocky mtn spotted fever.  We are left with the mystery of whether he ever did, or if he had something else and all the treatments worked anyway.  We may never know. 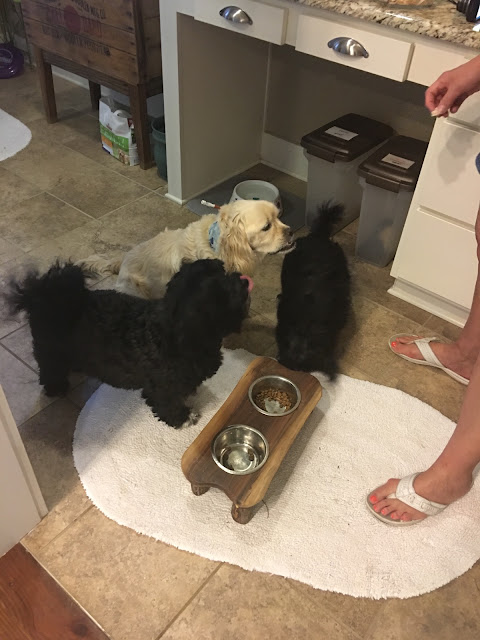 Casey with Pepper and new brother,  Rocky.
So, Casey is eating everything in sight, he is moving around to his favorite spots, he is interested and barking, he hasn't had seizures in a week, no fevers, no diarrhea, no throwing up. He is very tired, but very happy to be home with his family and brothers and he is getting a little better every day!

Thanks so much for all the well wishes and for keeping him in your prayers. You helped bring our Casey home and we will be forever grateful."

Here's another sunrise from our morning walk. 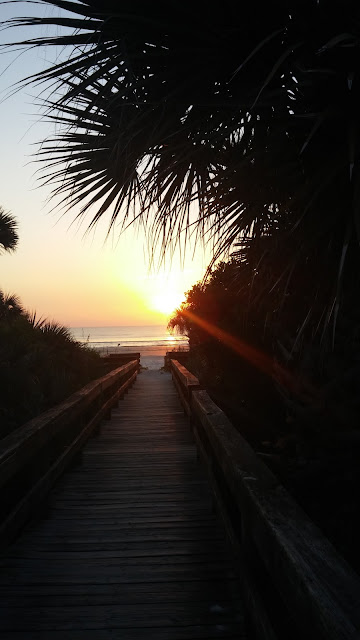 It's been a busy day getting ready for Mommy's guests. I helped grandma with the laundry. I sorted. I helped Mommy vacuum. I told the vacuum where to go. I helped unmask the bed, and I helped pick up used dryer sheets. After an exhausting time of housework I helped Grandpa take a nap.
Okay, World, Teddy signing off from the beach!